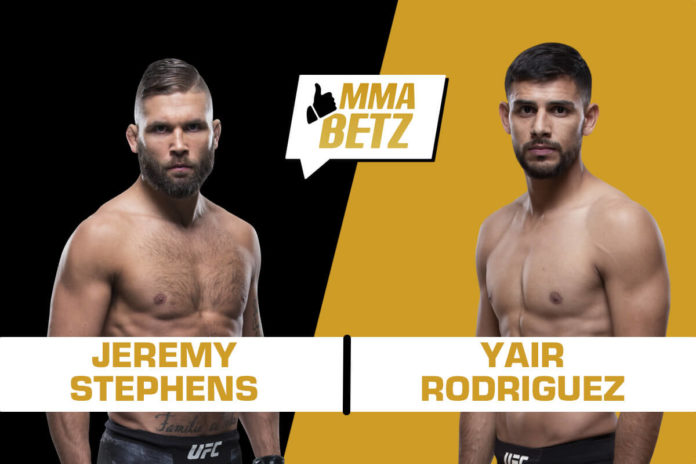 This coming weekend at UFC Fight Night 159, we have a great card coming your way in Mexico City, Mexico. Headlining the event will be a five-round featherweight bout between vicious knockout artist Jeremy Stephens and Taekwondo wizard Yair Rodriguez. Former WFF and LFA Flyweight Champion Brandon Moreno will also be making his return to the UFC at this event.

This is a very interesting and intriguing main event for a few reasons. Jeremy Stephens is a massive featherweight, and Yair Rodriguez is two inches taller than him, though both have the same reach at 71”. The power advantage certainly goes to Stephens, as 19 of his 28 wins are via knockout. Rodriguez has four of his eleven wins via knockout, but also has a black belt in Taekwondo, and he’s very good at circling around the outside and picking his opponents apart from there.

Rodriguez hasn’t fought since his Knockout of the Year candidate over Chan Sung Jung back in November of last year, and his last fight before that was a year-and-a-half prior. It’s unfortunate to see him miss so much time between fights considering he’s still only 26-years-old, but perhaps he’s fine-tuned some things that needed work.

Stephens was looking better than ever for a little while there during his most recent win streak, where he defeated the likes of Doo Ho Choi, Josh Emmett, and Gilbert Melendez. We were all thinking he’d finally hit his peak, until he ran into Jose Aldo that is. Since then, he’s lost two straight. How do you think this stellar featherweight match up goes? Will Stephens get back on the winning track, or will Rodriguez start up another win streak inside the UFC? Fight Card posted below: