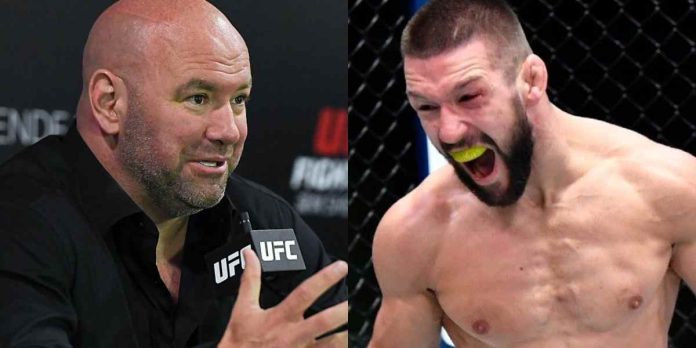 Mateusz Gamrot wants to fight Justin Gaethje after his hard-fought victory over Arman Tsarukyan at UFC Vegas 57, but Dana White has a more interesting matchup for him in mind.

Gamrot defeated Tsarukyan in a highly competitive and entertaining contest by unanimous decision at UFC Vegas 57. The fight was a treat for wrestling fans as both men put on a thrilling display with back and forth grappling action. The Armenian-Russian landed the more powerful shots and even stunned his opponent late in the fight, but the Pole looked the fresher of the two by the end of the fight and was awarded the win.

In his post-fight Octagon interview, an animated Gamrot called out Gaethje, calling him “the most violent guy in the division”.

In a recent interview with Yahoo Sports, Dana said that he was very impressed with Gamrot’s performance and thinks he deserves a top-five opponent next, such as Beneil Dariush.

“The main event was high level,” Gamrot said. “Incredible. I mean, just an amazing fight, and you’re talking about, what, number 11 and number 12 in that division. You know what I mean? So yeah, it was special. Yeah, I think what I love is, I love Gamrot/Dariush when [Dariush] comes back.”

Gaethje is coming off a first-round submission loss to Charles Oliveira at UFC 274, and is rumoured to rematch Dustin Poirier later this year, although nothing is confirmed yet. Even if Gamrot doesn’t get his desired fight against ‘The Highlight’, a potential showdown with Dariush would be a huge step up in competition as well, and a huge step towards the lightweight title for ‘Gamer’.

Who do you think would win a potential fight between Mateusz Gamrot and Beneil Dariush?