After the unfortunate ending to his UFC Vegas 21 bout with Belal Muhammad, Leon Edwards wants to return to action as soon as possible. Ideally with Colby Covington.

Edwards returned to the Octagon after almost two years to face Muhammad at UFC Vegas 21, but the main event ended in a no-contest after ‘Remember The Name’ received a brutal accidental eye poke from the Brit 18 seconds into the second round.

Shortly after the fight, Muhammad took to social media to give an update on his injury, and said that he wants to run it back with Edwards.

‘Rocky’ however has moved on from Muhammad. Speaking on ‘The Joe Rogan Experience’ podcast (as transcribed by The Mac Life), Edwards said that he is trying to get a fight with Colby Covington next.

“I’d like to be back straight away,” Edwards stated. “The fight was one round. I didn’t get to get in my flow. [I want to fight] straight away, really. I feel like May. We’re trying to get Colby Covington, so we’ll see what he says. So May, early June. We’ll see. But I want to be active this year. I had a long year-and-a-half off, so if we can bang them out, I’m going to keep banging them out.”

Edwards called for a title shot in his UFC Vegas 21 post-fight interview, to the surprise of many. A couple of days later however, Dana White announced that the welterweight title rematch between champion Kamaru Usman and Jorge Masvidal will headline UFC 261 on April 24th in a packed VyStar Veterans Memorial Arena in Jacksonville, Florida.

While it’s a great spectacle for the fans, Edwards said that Usman beats Masvidal nine times out of ten.

“Surprised? No,” Edwards said. “Because it’s about money, right? Putting asses in the seats. I think the fight ten out of ten times, Usman [wins] nine probably. It’s a good, entertaining fight for the fans, but as martial artists, it’s just one of them fights. Usman’s going to go out there and grapple him probably. I’ll be watching for sure. But if I had to put money on it, I would probably go Usman for the win again.”

After Chimaev pulled out of UFC Vegas 21, Covington was offered the fight with Edwards, but he turned it down because he was eyeing a fight with either Usman or Masvidal. However, he recently hinted that he’s open to fighting the Birmingham native, but at the right price.

Who do you think wins the potential welterweight showdown between Leon Edwards and Colby Covington? 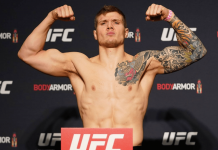