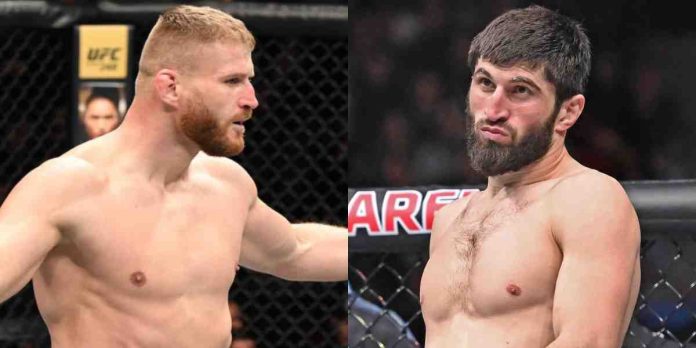 Magomed Ankalaev has revealed that he has verbally agreed to fight Jan Blachowicz and the ball is now in the former UFC light heavyweight champion’s court.

Ankalaev improved his winning streak to nine in a row by securing a second round TKO win over Anthony Smith at UFC 277, and wants to fight Blachowicz next. The Pole however is campaigning for a title fight against Jiri Prochazka, who wants to run it back with Glover Teixeira because he wasn’t happy with his performance in their first fight at UFC 275, where he won by fifth round submission.

In a recent tweet, Blachowicz claimed that Prochazka promised to fight him, urging Dana White to book a fight between the two, which he said would be the greatest fight in Europe’s history.

Ankalaev took to Twitter and claimed that he has agreed to fight Blachowicz, before asking Dana and Mick Maynard to not let him “run from me”.

Blachowicz responded by saying that he deserves to fight for the title.

Ankalaev was quick to respond as he bragged about his nine fight winning streak, suggesting that he deserves to fight for the title more than Blachowicz.

Prochazka responded by saying that Blachowicz must have misunderstood.

Teixeira also jumped into the conversation and agreed to fight Prochazka.

While Blachowicz is desperately trying to get his title shot, a rematch between Prochazka and Teixeira makes more sense as their first fight was regarded as one of the greatest bouts in the division’s history, and if it wasn’t for the Czech’s fifth round submission, things could have been different.

With Prochazka calling for a Teixeira rematch, a title eliminator between Ankalaev and Blachowicz makes the most sense.

Who do you think would win a potential fight between Magomed Ankalaev and Jan Blachowicz?