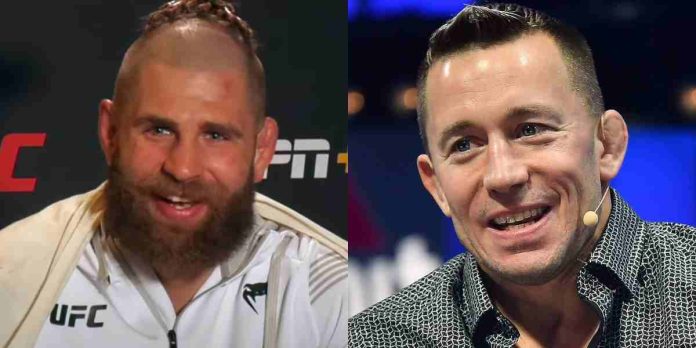 Jiri Prochazka couldn’t be happier that Georges St-Pierre has complimented him ahead of his light heavyweight title fight against Glover Teixeira at UFC 275 this weekend.

It has been a quick ascent for Prochazka in the UFC, as he’s fighting for the 205-pound title in only his third promotional fight, thanks to his brutal knockout wins against Volkan Oezdemir and Dominick Reyes. ‘Denisa’s’ performances inside the Octagon have caught the attention of many notable superstars, including former two division UFC champ St-Pierre, who believes the Czech has the tools to become a UFC titleholder in the future, even if he fails at UFC 275.

“He’s very dangerous. And he’s a great striker,” St-Pierre said. “But I think, maybe his ground game, we haven’t seen him too much on the ground. He’s never been exposed that much. That’s the thing, a lot of guys, they haven’t been exposed. I’m curious to see him compete more. But he’s very impressive. I think he’s going to be the future world champion.”

Speaking to MMA Junkie, Prochazka said he’s very happy to hear what St-Pierre had to say about him, and will make sure that he lives up to the expectations come fight night.

“That’s a huge honour,” Prochazka said. “I read that yesterday. I have to say: He is a true warrior. Because he is still working. He’s not fighting active, but he’s still working because he love it. I understand. I love that. I love the fighting, and it’s a big honour for me.”

Will Jiri Prochazka overcome the biggest test of his career in Glover Teixeira to become the light heavyweight champion at UFC 275?