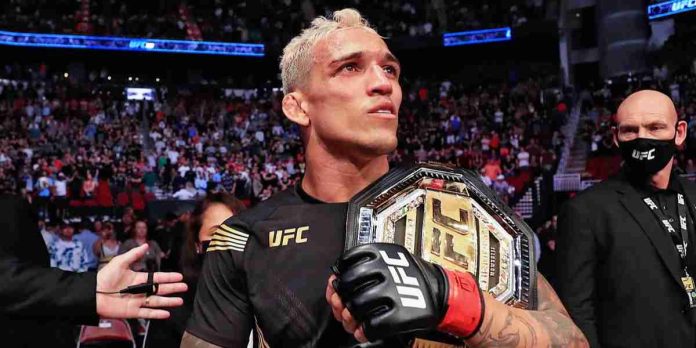 Charles Oliveira has predicted that his vacant lightweight title fight against Islam Makhachev will end in the first round this weekend at UFC 280.

Oliveira lost his title after missing weight by only half a pound for his fight against Justin Gaethje at UFC 274, where he won by first round submission. The Brazilian still considers himself the champ and has stated that his next fight will be a title defence. Standing in his way is Makhachev, who like ‘Do Bronx’ is riding an impressive winning streak and is a slight favourite ahead of the fight.

The former champ has eight losses to his name, most of them in his younger years. He doesn’t have an unblemished record like Khabib Nurmagomedov, but he’s grown immensely through the years and is undoubtedly the best lightweight in the world right now. Based on his losses in the past however, ‘The Eagle’ and his team believe he doesn’t have the ground game to take out Makhachev.

In a UFC 280 promo video (as transcribed by BJPenn.com) however, Oliveira said that he has overcome his weaknesses and expects to knock Makhachev out in the first round.

“I would think a lot about trying to take Charles down,” Oliveira said. “He fought against strikers who were afraid to go to the ground. I’m not afraid of it. With my BJJ, if you make a mistake, I’ll finish you off. I’m a better striker, better on the ground, better wrestler, I have no weaknesses. My weaknesses are long gone, that’s the truth. I’ll make history, the belt comes back home, I’ll knock him out in the first round.”

Who do you think will win the lightweight main event between Charles Oliveira and Islam Makhachev at UFC 280?