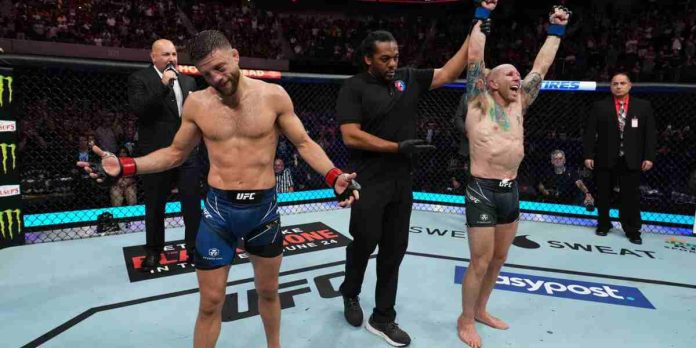 Calvin Kattar believes he deserved to get his hand raised at UFC Austin, where he lost by a razor close split decision to Josh Emmett.

Kattar and Emmett went the distance in a five round blood and guts war, with ‘The Boston Finisher’ throwing long, straight punches and ‘The Fighting Falmer’ responding with explosive power shots.

Emmett was the aggressor in the first couple of rounds, but Kattar made the necessary adjustments to gain the edge in the number of strikes landed down the stretch. Although the Team Alpha Male fighter continued to land bombs.

The fight was razor close by the end of the fifth and final round, with Emmett winning by scores of 48-47, 47-48 and 48-47. Kattar didn’t agree with the decision, however.

Calvin Kattar Disagrees With The Judges

During the UFC post fight show (as transcribed by MMA Fighting), Kattar said that he didn’t agree with the judges’ decision as he felt he did enough to get his hand raised.

“I thought I was just going to get my hand raised at the end,” Kattar said. “I didn’t care, sometimes we give a s*** if it’s unanimous or a split. I thought I did enough to win the fight. Josh is a class act, a tough kid. Congrats to him and his team. Obviously, he’s got a lot of power. You’re dealing with adversity, listening to that voice telling you to get small or you tell it to shut up and get big. Just working my way through the fight. Josh presented a lot of problems as a top featherweight would do. I thought I did enough to overcome them but I guess the judges saw it another way.”

Do you agree with Calvin Kattar?