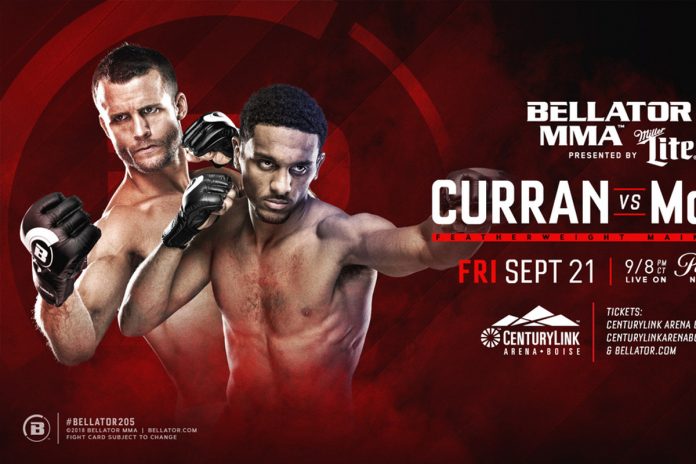 Tonight (Sept. 21) the Bellator 205 results will roll out live. The event will be held inside the CenturyLink Arena in Boise, Idaho. In the main event of Bellator 205, featherweight prospect A.J.

Patricky “Pitbull” knocking out Roger Huerta. my hats off to Huerta for not only stepping in on short notice but bringing the fight to Patricky. #Bellator205 pic.twitter.com/S61Lu9Trdv

After a close first two rounds, Rafael Lovato Jr. finally took over. The former IBJJF champ (9-0) grounded John Salter and snapped his seven-fight win streak with the below RNC. The 35-year-old is 5-0 in Bellator and has finished eight of nine victories, six by sub. #Bellator205 pic.twitter.com/h2YWQyv7cg

Blue-chip prospect A.J. McKee (12-0) becomes the first to finish John Macapá, taking him out with a straight left in a little over a minute! All of the 23-year-old's pro bouts have been in Bellator; he has finished eight of 12 wins, five by first-round KO. #Bellator205 pic.twitter.com/lJuOIls5M7

"I like to look flossy. I need a nice belt around my waist."

Need we say more? @AJMcKeeJr holds the record for consecutive victories in @BellatorMMA and now stands at 12!

It's a game of inches with these two.@lovatojrbjj looking to finish the fight while @JohnSalter_mma goes into wrestle mode! #Bellator205 pic.twitter.com/xEfNcyEXMI

Bite down and LET'S GO!@MS_VETA showing no fear in taking it to @Denisekielholtz! #Bellator205 pic.twitter.com/OmLLzBKIXH

They all agree "Get the DAZN app right now!" –@GoldieonTV https://t.co/j4BIUfmyff