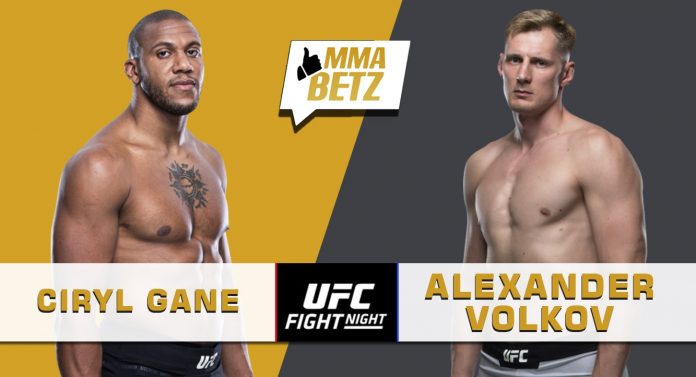 UFC Vegas 30 goes down this weekend at the UFC APEX in Las Vegas. In the main event, top-five heavyweights Ciryl Gane and Alexander Volkov lock horns in a potential title eliminator.

Gane, who started his MMA journey in 2018, is yet to taste defeat, holding a perfect 8-0 record. He’s coming off a clinical unanimous decision victory against a hard-hitting Jairzinho Rozenstruik at UFC Vegas 20. Volkov is currently on a two-fight win streak, and knocked out Alistair Overeem in his most recent outing at UFC Vegas 18.

Gane and Volkov are two highly technical and gifted heavyweights, although ‘Bon Gamin’ has more weapons in his arsenal.

Both fighters are predominantly strikers. Gane is a master of using his footwork, angles and pressure to frustrate his opponents, and has a similar style to Volkov in that sense. However, the Frenchman is a lot more explosive in comparison.

Statistically, both fighters have a very high output, although the Russian is a little more productive offensively. Gane lands 5.04 significant strikes per minute on average, with Volkov landing an impressive 6.19.

Gane is a lot better defensively, as he absorbs a minuscule 1.85 significant strikes per minute on average. In comparison, Volkov absorbs almost double, with 3.3.

Volkov has a slight one-inch advantage in arm reach, but a massive 5.5 inch advantage in leg reach. If ‘Drago’ adopts a kick-heavy approach, he can keep Gane at bay, frustrate him and force him into making mistakes.

Gane should look to close the distance and inflict damage in the clinch, and try to take the fight to the mat. He could also choose to fight on the outside, but it’ll be a tough ask against a fighter as experienced and clinical as the Moscow native.

Volkov should watch out for the takedowns, as Gane is exceptionally good on the ground. While Volkov isn’t a slouch on the mat either, he has a solid chance of winning if he can keep the fight standing.

All in all, Volkov will use his experience and high-volume striking to overpower Gane and take a stoppage victory home.

Who do you think wins the top-five heavyweight battle between Ciryl Gane and Alexander Volkov at UFC Vegas 30?