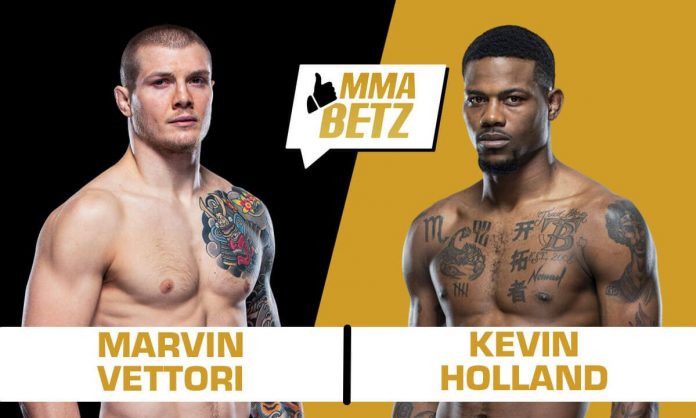 UFC Vegas 23 goes down this weekend at the UFC APEX in Las Vegas. In the main event, Marvin Vettori takes on short-notice replacement Kevin Holland in a top six middleweight contest.

Vettori was originally scheduled to fight Darren Till, who had to pull out after breaking his collar bone, making way for Holland to step in on less than two weeks’ notice. ‘The Trailblazer’ fought less than three weeks ago against Derek Brunson at UFC Vegas 22, losing via a lopsided unanimous decision.

Brunson dominated Holland on the mat throughout their five-round main event at UFC Vegas 22, as the 29 year old had no answer to his opponent’s wrestling. He did have some success on the feet however, but couldn’t keep the fight standing for long enough.

If the same Holland shows up against Vettori, he’ll be in for another long night, because not only is ‘The Italian Dream’ a very capable wrestler, but he’s also a better boxer than Brunson, and known to be extremely aggressive. He’s also known for his durable chin.

Holland has the edge in striking. He’s faster, more powerful, and has an incredible seven-inch reach advantage. Vettori is no slouch on the feet however, and has shown massive improvements in his standup game in his last few fights.

Statistically, Holland lands almost the same amount of significant strikes on average per minute as Vettori, which is just over four-and-a-half. But he has a slightly better striking defence and more power in his hands than his opponent. The best route to victory for the California native is for him to utilise his reach advantage to manage distance and land shots.

Vettori has the edge in the grappling department. He’s the better wrestler, and has relied heavily on his submission game in the past. The Italian will also have a strength advantage if the fight goes to the mat.

The Kings MMA representative is normally a smart fighter, but he’s often hot-headed, and Holland could trash-talk him into making some costly errors. Otherwise, Vettori has the advantage in this fight.

Who do you think wins the UFC Vegas 23 main event between Marvin Vettori and Kevin Holland?