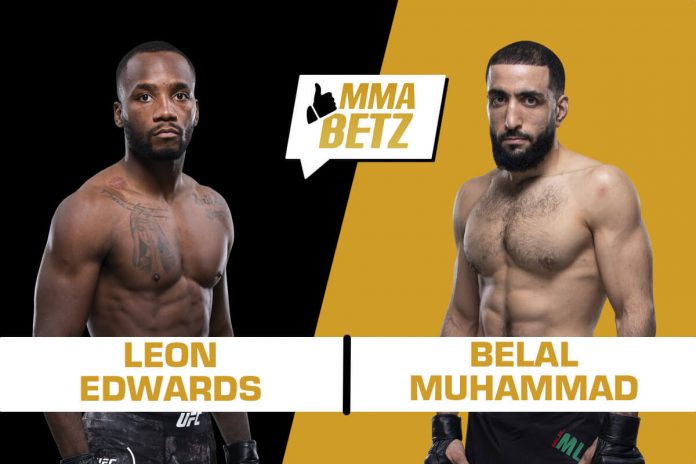 UFC Vegas 21 goes down this weekend at the APEX Center in Las Vegas. In the main event, number three ranked welterweight contender Leon Edwards competes in a high-risk fight against Belal Muhammad, who sits at number 13 in the current 170lbs rankings.

Edwards was originally booked to fight Khamzat Chimaev at UFC Vegas 21, but ‘Borz’ was forced to withdraw from the fight due to COVID-related complications. The fight was then offered to Colby Covington, who turned it down. Fortunately for The Brit, who hasn’t fought in nearly two years, Muhammad stepped up.

Edwards is a huge step-up in competition for Muhammad, who has been fighting mostly unranked and bottom-tier contenders in the welterweight division. He will surely be looking to make the most of this opportunity, and therefore, this makes for an interesting matchup.

Muhammad has been the more active of the two fighters, and has fought three times since Edwards beat Rafael dos Anjos at UFC San Antonio in the summer of 2019. Given his lack of Octagon time during the past couple of years, we might see a slow start from the 29 year old.

Edwards and Muhammad have completely different styles, but both are well-rounded. ‘Rocky’ is a strong and crafty striker, with an extremely underrated ground game. While ‘Remember the Name’ is an aggressive fighter, who brings pressure to his opponents with his striking, before landing the inevitable takedown.

In the grappling department, things get pretty interesting. Muhammad is a strong wrestler who likes to grind his opponents. He is very good at taking his opponents down, and is generally effective at controlling them. Edwards is also a very skilled grappler. Not only can he take people down, but he can also control and submit them whenever he sees an opening. He also has decent takedown defence, and Belal will have a hard time taking him down and controlling him on the mat.

While both fighters have great cardio, Edwards has a slight advantage in that he has gone the full distance in a five round fight twice, whereas UFC Vegas 21 will be the first time Muhammad headlines a UFC event.

It’s a huge opportunity for Muhammad to earn a place in the welterweight top five, but it’s going to take something special from him to take Edwards, who is potentially one win away from a title shot, out of the equation.

Who do you think wins the UFC Vegas 21 main event between welterweights Leon Edwards and Belal Muhammad?