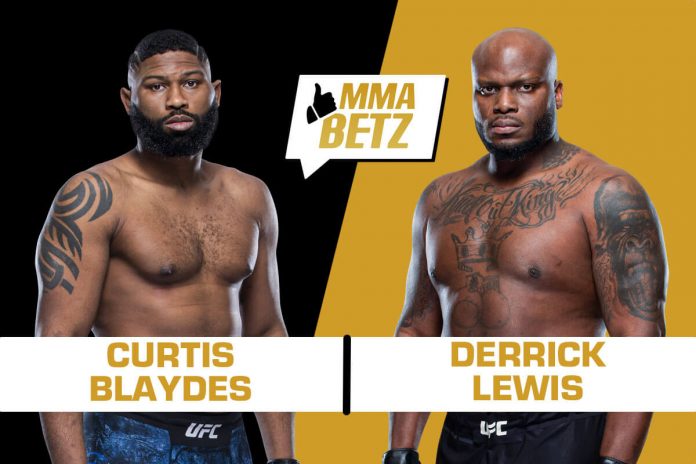 UFC Vegas 19 goes down this weekend at UFC APEX in Las Vegas. In the main event, top five heavyweights Curtis Blaydes and Derrick Lewis will fight for the chance to take a giant step towards a title shot.

The heavyweight contenders were originally scheduled to face off in the UFC Vegas 15 main event in November but Blaydes had to withdraw the day before the fight after testing positive for COVID.

With dominant wins over Junior dos Santos and Alexander Volkov in 2020, Blaydes has continued to impressive since losing a second time to the number one ranked Francis Ngannou at UFC Beijing in 2018, winning four straight.

Lewis is riding a three-fight win streak, with his most recent win coming against Aleksei Oleinik via second TKO at UFC Vegas 6. A win over Blaydes will also put him in strong contention for another shot at UFC gold.

Blaydes vs Lewis: Analysis And Prediction

In theory, the fight will be a classic grappler vs striker matchup, but things are far more complex.

‘The Black Beast’ is a tough cookie to crack. He has got this incredible ability to tackle adversity and find a way to win fights, even when he is not at his best. Lewis is very unpredictable, so you always have to stay alert when fighting against him. At UFC 229, the former title challenger was losing on the judges’ scorecards against Alexander Volkov, before he pulled a crushing KO punch out of his magic hat with only 11 seconds left. He has done it in the past, and he can do it again come fight night.

It’s understandable that Blaydes is the favourite coming into this fight because he is the more well rounded of the two. Previously known as a ‘one-trick pony’, the 29-year-old has made significant improvements to his stand-up in recent fights. Yet, standing and trading shots with Lewis is not a wise move, because ‘The Black Beast’ is very durable and extremely threatening.

At UFC 230, Daniel Cormier defended his heavyweight title against Lewis with relative ease, as he took the fight to the ground and controlled him. While ‘DC’s’ wrestling credentials are second to none, Blaydes is the more aggressive wrestler inside the Octagon, and uses his size and strength to his advantage.

What’s your prediction for the UFC Vegas 19 main event between Curtis Blaydes and Derrick Lewis?