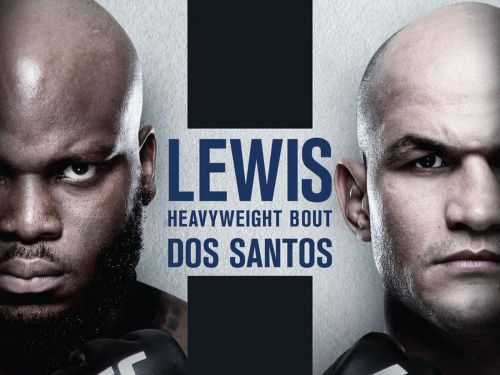 MMABetz is back with your predictions and betting tips for UFC Fight Night 146 as UFC returns to free television with a blockbuster main event in the Heavyweight division. The event takes place from Wichita, Kansas on March 9, 2019 and boasts an enticing encounter between former UFC Heavyweight Champion, Junior dos Santos and big hitter, Derrick Lewis. So, who will win? Let’s get down to business and find out.

Junior dos Santos is the favourite with the bookies which is likely due to his status as a legendary figure in the sport. It is not based upon his current performance levels. dos Santos has won his past two bouts inside the Octagon, but that is the first time he has won consecutive fights since 2011-12. His wins have come against middle of the road Heavyweights Blagoy Ivanov and Tai Tuivasa. Lewis is a different animal entirely, who is undoubtedly the heaviest hitter in all of MMA right now.

dos Santos’s best chance of victory would seem to be if he can use his superior speed and movement to basically jab Lewis into submission and outwork him to earn a decision. He is probably best served employing a body attack as well to negatively affect Lewis’s questionable cardiovascular conditioning still further.

Lewis is not renowned for his speed but he does move faster than a lot of observers may think.  He will not stand motionless and allow dos Santos to pound him with body strikes.

He has struggled with body shots in the past but this time he should have them scouted. He will also be encourage by the fact that dos Santos has been on the receiving end of several Knockouts in recent times, most notably by Alistair Overeem and Stipe Miocic. “The Black Beast” hits harder than both of them and will know if he can withstand dos Santos’s attacks then he may be only one punch away from victory.

Lewis was out wrestled and out fought by Daniel Cormier in his UFC Championship bout at UFC 230. He likely won’t face those problems with dos Santos. Therefore, I am backing the underdog to come good and KO his opponent and put himself back in line for a Heavyweight title shot.