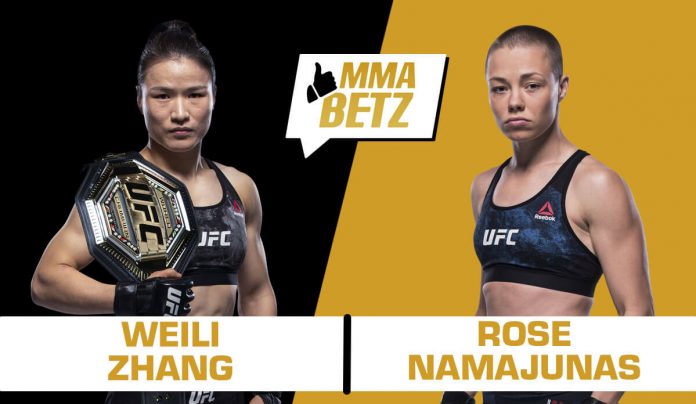 UFC 261 goes down this weekend at VyStar Veterans Memorial Arena in Jacksonville, Florida. In the co-main event, Zhang Weili defends her strawweight title against the former champion, Rose Namajunas.

China’s first ever UFC champion is on a 21-fight win streak, with her most recent win coming against Joanna Jedrzejczyk via a razor close split-decision at UFC 248, in what was the fight of the year in 2020. Namajunas is also coming off a split-decision victory against Jessica Andrade at UFC 251.

Zhang has the edge as far as power and strength are concerned. She hits incredibly hard, which will be a huge advantage for the Chinese star on the night. Her punches are definitely going to have a big impact on the challenger.

Namajunas has a height and reach advantage, and moves very well inside the UFC Octagon. She will try to stay on the outside and mix her strikes up to force the champion into making mistakes.

In the grappling department, the two are again very well-matched. Namajunas has five submissions to her name, while Zhang has seven submission wins. It’s a very close fight if it goes to the ground, but the Beijing native will again have a strength advantage on the mat.

Zhang is a fast starter, with 11 first-round finishers to her name. Overall, she has an 81 percent finishing rate, which means Namajunas will have to be careful wherever the fight goes.

All in all, we should expect a very technical battle, with Zhang’s brute force, volume, and gas tank turning the tide in her favour.

Who do you think wins the strawweight title fight between Zhang Weili and Rose Namajunas in the UFC 261 co-main event?