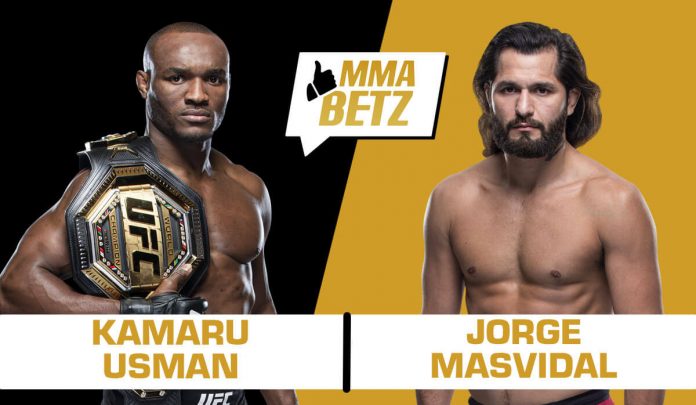 UFC 261 goes down this weekend at VyStar Veterans Memorial Arena in Jacksonville, Florida. In the main event, Kamaru Usman defends his welterweight title in a rematch with Jorge Masvidal.

Usman successfully defended his title for the first time against Masvidal via unanimous decision at UFC 251, after ‘Gamebred’ stepped in on one weeks’ notice to replace Gilbert Burns. Although ‘The Nigerian Nightmare’ was able to dominate the fight, the Miami native believes the outcome will be very different with a six week fight camp.

With a full fight-camp, the Masvidal promises to put a bad beating on the reigning champion, who wants to leave no doubt this time around by finishing the challenger.

Masvidal will enter the Octagon at UFC 261 better prepared, and in shape. However, Usman is still a tough stylistic matchup for him.

In the striking department, Masvidal has the edge. He’s faster, more dynamic, and has a variety of tools on the feet. He’s also got some of the best boxing in the UFC, and will cause Usman a lot of problems on the feet, despite the champion showcasing visible improvements to his standup game against Burns at UFC 258.

While Masvidal isn’t a slouch on the mat, Usman definitely has the edge in the grappling department. He is one of the best active wrestlers in the UFC, and should try to use his grappling advantage to win the fight. However, his opponent has shown time and again that he’s a tough man to takedown and control.

Rest assured, it’ll be a more competitive fight than their first one. However, Usman will again outpoint Masvidal to a hard-fought decision victory.

Who do you think wins the welterweight title rematch between Kamaru Usman and Jorge Masvidal in the UFC 261 main event?