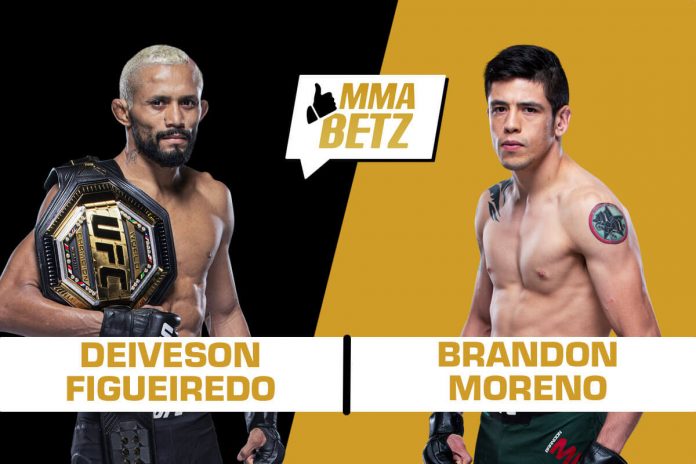 UFC 256 goes down this weekend at UFC APEX in Las Vegas. In the main event, flyweight champion Deiveson Figueiredo (20-1) defends his crown against Brandon Moreno (18-5-1).

Figueiredo finished Alex Perez in the first round at UFC 255 just three weeks ago to successfully defend the belt he won at UFC Fight Island 2 by beating Joseph Benavidez. Moreno also competed at UFC 255, beating Brandon Royval via first round TKO.

The Brazilian is a strong favourite heading into the UFC 256 headliner. He also has a lot of eyes on him, especially after back-to-back masterful performances against Benavidez, and then his quick finish of Perez. But despite the odds against him, ‘The Assassin Baby’ will be coming in strong Saturday night, in what will be the biggest fight of his career.

Moreno is primarily a grappler, with 10 of his 13 career finishes coming by way of submission. With that being said, Figueiredo is a fantastic grappler in his own right too, with eight of his career finishes coming via submission. If it goes to the ground, the fight is very hard to predict. What’s more predictable is that the 27 year old Mexican will be the one shooting for the takedowns, while the champion will be looking to keep the fight standing.

The 32 year old Figueiredo has the ability to submit a top grappler like Moreno, but he would prefer to stand and trade, and while doing so, if he finds the opening for a submission, the reigning champion will welcome it with open arms.

Moreno’s best chance of winning this fight is by taking it to the ground and controlling his opponent, which is a tough ask. But he will also have his moments in the standup. He’s known as an aggressive puncher, which might work as a double-edged sword for him in the fight. He could either break Figueiredo’s rhythm with his chaotic striking and land some big shots, or get pieced-up.

‘Deus Da Guerra’ has a big striking advantage over his opponent. He is technical, precise, sharp and has heavyweight-like power in his hands. If Figueiredo gets going, Moreno might have a very bad night.

Moreno is out-gunned in all areas, and it will take something special for him to take the belt. But one thing is guaranteed, he won’t go out without a fight. He has lost five times in his career, but has never been finished. And three of his losses can in his first five professional fights. If he can dodge the early onslaught, he can make the fight interesting.

What is your prediction for the UFC 256 main event between Deiveson Figueiredo and Brandon Moreno?