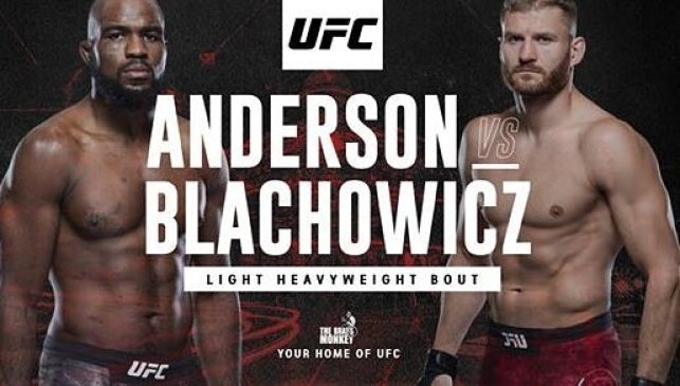 We have a great rematch scheduled this weekend in the UFC’s light-heavyweight division between the No. 5 ranked Corey Anderson and the No. 6 ranked Jan Blachowicz. These two met before back in 2015 while Anderson was just 5-1, and while Blachowicz was 18-4; Anderson won the fight via unanimous decision (30-25, 30-25, 29-26), scoring four takedowns on just four attempts. Will anything be different this time around? It’s always exciting to have a rematch of a fight that went the distance, but get two more rounds the second time around.

The odds for this bout have Anderson as a favorite, with himself at -220, and with Blachowicz at +180. This means you would need to bet $220 on Anderson to win $100 with a win, and you would need to bet $100 on Blachowicz to win $180 with a win. The odds for this bout are right about where they should be, these are two incredibly skilled fighters. Just because Anderson was able to out-wrestle Blachowicz the entire time during their first encounter doesn’t mean he’ll be able to again.

Blachowicz has some great striking, holding a 34-0 record in professional kickboxing. He also has a BJJ black belt, which he’s been able to show off a few times for us as well. Anderson is perhaps the most dangerous threat to Jon Jones, or anyone at 205 lbs. People don’t take him seriously because he got starched in his last two losses and almost always wins via decision, but he showed us how good his striking has gotten in his last outing against Johnny Walker.

Not only that, but even when he does win decisions, they’re incredibly dominant every time. He mauled Glover Teixeira in a way only Phil Davis was ever able to do, and he did the same thing to Pat Cummins, who beat Daniel Cormier in wrestling. Anderson’s no joke, he’s improving drastically. His pace is insane, his cardio and wrestling are just too much for most, ‘Overtime’ is certainly the right nickname for him.

Who will you be betting on in the potential No. 1 contender fight?