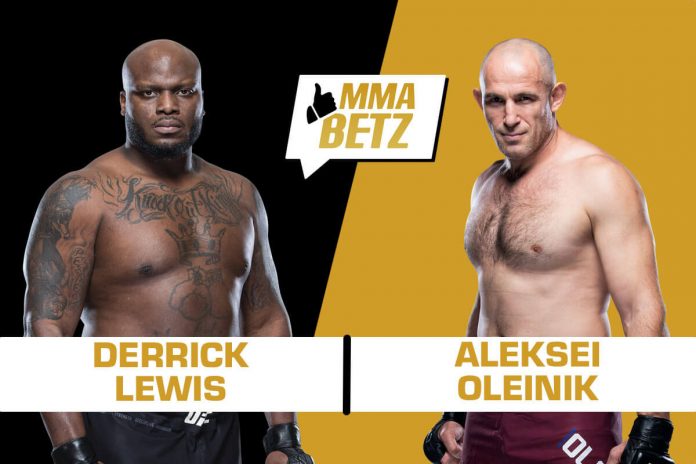 UFC Vegas 6 goes down this weekend at the UFC APEX in Las Vegas, and will be headlined by a heavyweight clash between Derrick Lewis and Aleksei Oleinik. Both men enter the contest ranked within the top ten in the UFC heavyweight rankings. ‘The Black Beast’ is coming off back-to-back decision wins in his last two bouts over Blagoy Ivanov and Ilir Latifi. Meanwhile, ‘The Boa Constrictor’ is coming into the fight red hot, following wins over Maurice Green and the former heavyweight champion, Fabricio Werdum.

Lewis will be looking to add another win to his resume, and is the betting favourite. According to FanDuel Sportsbook, he sits at -210 currently. The number four ranked heavyweight boasts a 14-5 record in the UFC and 23-7 overall, with an impressive 18 knockouts. Both men have potency however, but the American surely has the advantage when it comes to the stand up game.

Oleinik comes into the match 8-4 in the UFC, but holds an incredible professional record of 59-13-1 with an incredible 46 submissions. Expect the Russian to try and get Lewis to the ground, where he can do his best work. Although, ‘The Boa Constrictor’ comes in at an underdog to win (+176 according to FanDuel Sportsbook), he will look to get his 60th professional career win, spanning four decades.

Tale Of The Tape:

Both fighters stand 6 foot 2 inches tall and have almost identical reach. The slight edge going to the 43 year old at 80 inches, one inch more than his opponent. Lewis typically weighs in at the max 266lbs limit for a non-title heavyweight contest. While Oleinik usually comes in around 240lbs.

Oleinik has a devastating ground game that can cause real problems for Lewis in the long hall. Especially because the 35 year old has been known to tire quickly. However, ‘The Black Beast’ will be looking to follow in the footsteps of Alistair Overeem and Walt Harris, who both stopped the Russian on the feet in 2019. The latter only needing 12 seconds at UFC San Antonio.

As with many strikers versus grapplers, predicting the outcome is no easy feat. But with Lewis sitting at -140 to win by KO/TKO, this is much better value compared to -210 for him just to win. With the fight unlikely to go to the judges’ decision, this is a great bet. However, if you are looking to back the blue corner, consider betting on Oleinik to win via submission +280. He is looking for his 60th career win and is closing in on 50 career submissions.

Who do you think will get their hand raised in the UFC Vegas 6 main event, Derrick Lewis or Aleksei Oleinik?