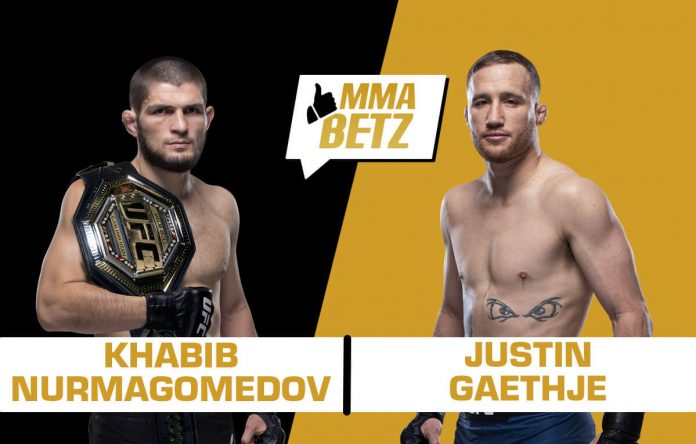 At UFC 254, Khabib Nurmagomedov will defend his lightweight title against the interim champion, Justin Gaethje. Speaking ahead of the night, UFC president Dana White stated that the card is trending more than any other event in the promotion’s history.

Khabib has dominated all 28 opponents that have stood across the cage from him, but many fans believe that Gaethje will prove to be the toughest challenge of the Dagestani’s career to date. Speaking to the media ahead of UFC 254, Dana discussed how the last event in the promotion’s second stint on Fight Island is trending.

“This thing is trending off the charts for us right now,” Dana stated. “So, today is Tuesday and on Monday, this thing was trending to be the biggest fight we have ever had. Not Thursday, not Friday, Monday.”

The Biggest Fight Of All Time?

To date, Khabib’s win over Conor McGregor at UFC 229 is the biggest selling event in all of MMA. Dana is unsure if UFC 254 will break that record, partly because the main card starts in the afternoon in North America, but he says that right now it seems as if the match could break the previous record, but the question is whether the trend will continue.

“It is trending bigger than that right now,” Dana said. “Will the trend hold? One of the things that is a big negative for us is that it is not in primetime at home and it is hard to message that to people.”

Khabib is coming off a third round submission against Dustin Poirier at UFC 242. Before that, he won his first title defence game against Conor McGregor at UFC 229, also via submission. Other big names ‘The Eagle’ has beaten inside the Octagon include Edson Barboza, Rafael dos Anjos and Michael Johnson.

At UFC 249, Gaethje defeated Tony Ferguson via TKO in the fifth round, to win the interim lightweight title. It was his fourth victory in a row, after knockout knockout wins against ‘Cowboy’ Cerrone, Edson Barboza and James Vick. The 31 year old was previously the lightweight champion in the World Series of Fighting.

Despite the fact that the general consensus is that Gaethje will prove to be Khabib’s biggest challenge, the undefeated champion is a -340 favourite. While ‘The Highlight’ is the +260 underdog.

Do you think Khabib Nurmagomedov or Justin Gaethje will leave UFC 254 the lightweight king?