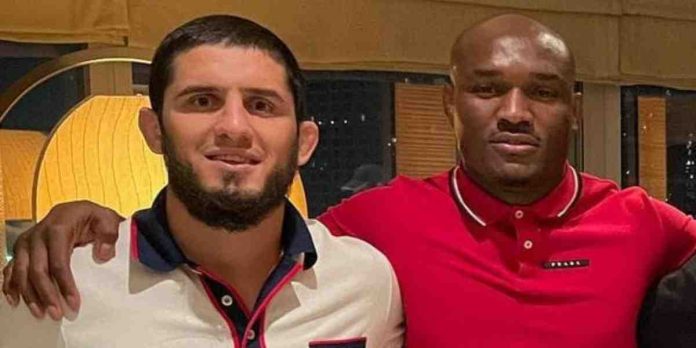 Edwards snatched victory from the jaws of defeat at UFC 278, where he knocked Usman out in the final minute of their welterweight title fight. ‘The Nigerian Nightmare’ had a tough first round, but controlled the fight from the second round onwards, repeatedly taking his opponent down and controlling him throughout the fight up until the stoppage.

With the two tied at 1-1, a rubber match makes the most sense right now, although Jorge Masvidal believes he deserves to fight for the title given his history with the newly crowned champion. Dana White said that the UFC will book an immediate rematch between Usman and Edwards however, preferably in England.

Islam Makhachev On Edwards vs Usman 3

Usman is confident that he will reclaim the 170 pound title should there be an immediate rematch, and Makhachev agrees with him. In an interview with ESPN (as transcribed by MMA Junkie), the Dagestani said that he believes ‘The Nigerian Nightmare’ will 100 percent beat ‘Rocky’ in a potential trilogy.

“Edwards [got] lucky because [Usman] beat him all five rounds, almost,” Makhachev said. “First round, [Edwards took] him down, take his back, but other rounds [Usman] beat him very easy, took him down many times and smashed him there. When they’re going to fight again in rematch, 100 percent I think Kamaru is going to beat him because Edwards have same problem, always with wrestling guys.”

Makhachev is scheduled to face Charles Oliveira for the vacant lightweight title at UFC 280 in October.

Who do you think will win a third fight between Leon Edwards and Kamaru Usman?