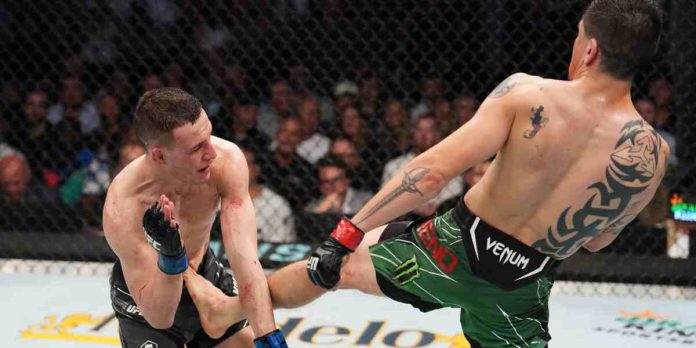 Referee turned analyst John McCarthy believes everything was going according to plan for Kai Kara-France before he was brutally knocked out by Brandon Moreno at UFC 277.

Moreno and Kara-France fought for the interim flyweight title at UFC 277 and were even on the scorecards after two rounds. The New Zealander had a fantastic start to the third round, tripping his foe to the floor and landing vicious elbows that did a lot of damage. ‘Don’t Blink’ then continued to land the more effective strikes after the two got back up to their feet.

‘The Assassin Baby’ launched a massive counterattack and cranked up the pressure before landing a brutal liver kick that forced Kara-France to cover up. Moreno landed a number of additional shots, before referee Herb Dean intervened and called a halt to the contest.

John McCarthy On Moreno vs Kara-France

Speaking on his WEIGHING IN podcast (as transcribed by Sportskeeda), McCarthy praised both men involved in the UFC 277 co-main event.

“You’ve gotta love both guys,” McCarthy said. “I love Kai Kara-France, and I love his attitude, and I love what he was trying to do in there. At times, man, he was winning that fight – Beautiful sticking and moving, good accuracy. He had power. He made Brandon Moreno respect him.

“It was competitive throughout. It was a good fight. And then, Kai Kara-France opened up a nice cut with that elbow. There was a lot of things going on. I actually thought that at the point where, just before that [liver kick] happened, I thought Brandon was starting to press a little too much. I thought Kai Kara-France actually had the fight going the way he wanted it to be going.”