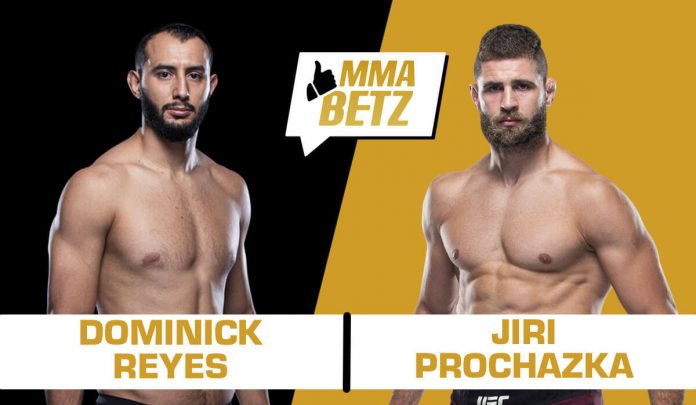 UFC Vegas 25 goes down this weekend at the APEX Center. In the main event, top five light heavyweights Dominick Reyes and Jiri Prochazka go head-to-head in a high-stakes fight.

Reyes is coming off back-to-back losses in title fights against Jon Jones at UFC 247 and Jan Blachowicz at UFC 253. While the Pole stopped him in the second round, his unanimous decision loss to ‘Bones’ was much closer, and many believe he won the fight. On the other hand, Prochazka made a thumping start to his UFC career, knocking out Volkan Oezdemir in the second round at UFC 251.

Make no mistake about it, Reyes vs Prochazka is going to be an absolute war. Both men are ferocious strikers, with the majority of their wins coming by way of knockout.

Prochazka is the more aggressive of the two strikers, with 24 of his 27 wins coming by way of knockout. The Czech has a very unorthodox fighting style, which works wonders for him, but it also leaves him vulnerable to strikes. Although his style gave Oezdemir a lot of trouble, the Swiss was able to land some good shots on him.

Prochazka also uses his movement really well as he constantly switches stances, throws feints, and stays very light on his feet. One mistake against him, and it’s curtains.

Reyes is the more technical striker, who likes to cut angles and use his footwork to land combinations. He is one of the most accurate strikers in the division, and his opponent can’t afford to make a lot of mistakes against him.

We shouldn’t expect a lot of grappling in the UFC Vegas 25 main event as both fighters are predominantly strikers. It’s a very close fight, and could go either way. Although Prochazka has the mental edge in this fight.

All in all, it’s going to be a firefight, with Prochazka getting the better of the exchanges and finishing the job early.

Who do you think wins the light heavyweight main event between Dominick Cruz and Jiri Prochazka at UFC Vegas 25?