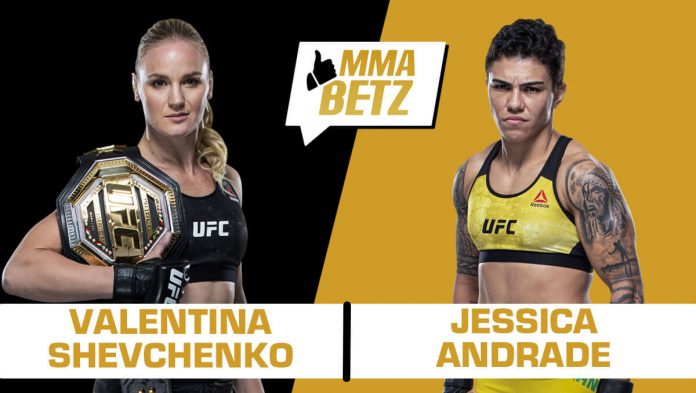 UFC 261 goes down this weekend at VyStar Veterans Memorial Arena in Jacksonville, Florida. In the third title fight on the night, Valentina Shevchenko defends her flyweight crown against Jessica Andrade.

The former strawweight champion made her 125lbs debut against Katlyn Chookagian at UFC Fight Island 6 and finished her in the first round, to earn her title shot. Shevchenko has fought almost every top contender in her division, but the Brazilian promises to be a tricky challenge for the flyweight queen.

Shevchenko has looked unbeatable at flyweight, but Andrade is looking to do the unthinkable at UFC 261. Andrade is a high-volume striker, who lands 6.55 significant strikes per minute, compared to ‘Bullet’, who lands 3.06 significant strikes per minute. But don’t let the numbers deceive you as the champion is clearly the better striker, as far as technique, movement, speed, and variety are concerned.

Because she’s so incredibly efficient on the feet, Shevchenko’s grappling skills are often overlooked. Should this fight go to the ground, which it may do if the champion chooses to grapple, she will have the advantage. However, the two are still very well-matched up on the ground.

Shevchenko is always in shape, whether she’s fighting or not. She’s one of the most hard-working athletes in the UFC, and should come fully prepared on the night. She will be able to keep the same pace throughout their five-round bout if it goes the distance. However, Andrade will also have more in her gas tank this time around as she won’t have to cut down to 115lbs.

All in all, Shevchenko is the superior fighter and should use her movement, speed, and accurate striking to cruise to a decision victory.

Who do you think wins the flyweight title fight between Valentina Shevchenko and Jessica Andrade at UFC 261?